The Seaside beach lies on the edge of the mighty Pacific Ocean just 18 miles south of where the Columbia River empties into the Pacific. The Necanicum River, which runs directly through Seaside, flows into the ocean on the northern edge of town and the popular hiking destination, Tillamook Head, towers over the ocean on the southern edge. The coastline stretching from Tillamook bay that runs north past the Columbia River bar has been loosely termed as the “Graveyard of the Pacific.” Unpredictable weather and rocky coastal conditions have caused over 2,000 shipwrecks in this stretch alone. In fact, just 15 miles north of Seaside, the Peter Iredale Shipwreck can still be seen where it washed ashore in September of 1906.

Just steps away from our hotel is the Seaside Promenade, and the Seaside beach. The Promenade, also known as “The Prom” is a 1.5 mile long paved path that borders the beach and ocean. Take a stroll, ride your bike, or stop at one of the many benches and watch some of the most amazing sunsets in the world. Walk the Prom and about halfway through you’ll come across the turnaround. The turnaround was built to help redirect traffic back downtown and is also home to a statue of Lewis and Clark. The statue signifies Lewis and Clark reaching their final destination before “turning around” and heading back home.

On the beach, build a campfire, hop in the ocean, or rent a beach bike. Visit us during the razor clam season and gain access to one of the most concentrated populations of razor clams in the world – all you need is a day permit if you’re not an Oregon resident. Interested in seeing more coastal wildlife? Just walk north from the turnaround and you’ll come across one of the oldest Aquariums on the west coast! Founded in 1937 the Seaside Aquarium is home to multiple harbor seals, and other marine species. You can feed the seals, watch them play, or check out the viewing and touch tanks inside.

While the Seaside Beach is a popular tourist destination all year long, it is also home to some huge annual events. The beach acts as the finish line to the long running Hood-to-Coast Race and is home to the Seaside Beach Volleyball Tournament – one of the largest beach volleyball tournaments in the world. These events, and others alike, bring in friends and families from across the globe and are just a couple of the things that make Seaside an amazing place to spend your summer vacation. Looking for some traditional 4th of July fun? Seaside hosts one of the largest firework displays on the West Coast. If you’re trying to miss avoid crowds just head north, or south a few miles and you can still see the show as clear as day thanks to its large scale.

Seaside is proud to be one of the few beach towns in Oregon that provides free beach wheelchairs for the public. Those looking to rent a beach accessible wheelchair can call the Bob Chisholm Community Center at 503-738-7393 for more information or to reserve a beach wheelchair. Reservations are free and available on a first-come, first served basis for up to four hours at a time.

Want to join the discussion?
Feel free to contribute! 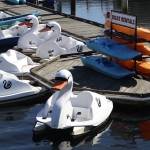